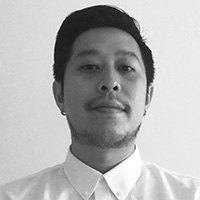 “Do you live on trees with tigers roaming around in your neighbourhoods?” was what Alvin got asked the most when he first came to K.L when he stated that he hailed from Pahang, biggest state in Malaysia and where our National Forest located. Funny thing is he has been in the advertising & digital scene for 10 years. So there are Wi-Fi and computers on tree houses afterall.

He had a stint at GOVT Singapore for a year leading key account OCBC Bank. Before that he was with two advertising giants includes FCB Kuala Lumpur and BBDO Malaysia. As for life before joining the big boys, he was the core creative person in Scream Interactive and XM Expanded Media on a host of brands like Celcom Axiata, Oreo, KFC, MARS (Pet Care), GAB (Smirnoff ICE/Strongbow/Kilkeny), Acer, CIMB, Nissan, Infiniti, Panasonic, Twisties and Mild 7 throughout his career.

His work has also won the awards that matter, including One Show, Cannes, Spikes, Adfest, Ad Stars, Kancils, AMES, Markies, Effies and MoBEX.

At FCB Kuala Lumpur as Creative Group Head. In a short span of 1 year, he had won a few accounts such as Acer and OCBC Bank and also bagged a few awards such as The Markies, MoBex and ADStars. He then also shorlisted as one of the Influencer Of The Year 2016 by CreativePool.

He first got his hand on the Malaysia most prestigous creative award The Golden Kancil at 2013 during his first year joining BBDO Malaysia that lead them to being #3 Agency and followed by Agency of the Year a year after at Malaysia’s Kancil Advertising Awards. The KFC Phonestack and Sheba Pitch Purffect campaigns both featured in the Directory Big Won Report as Top 100 Direct and Digital Campaigns with him as one of the Top 100 Art Director worldwide.

Dispite all these madness, he’s still a quiet person and hopes to take a break back to the jungle and being alone with animals once in a while but so far he had only managed to do that with his pet dog.